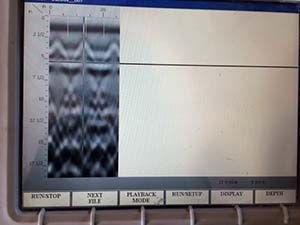 In early January, GPRS was contacted by a general contractor to perform concrete scanning. The contractor was in the process of renovating an apartment complex in Shelbyville, KY. The engineer involved with the project suggested using GPR to determine if reinforcing existed on the second floor breezeways. The breezeway which was scanned was a pan-deck slab. This required scanning in the same direction as the pan-deck. When scanning over the deepest points of the pan-deck, it was determined reinforcing existed within the breezeway. This information was then compiled into a report which included data images, pictures, and findings. The report was submitted to the contractor to present to the engineer. The work was completed using a GSSI (Geophysical Survey Systems, Inc.) Ground Penetrating Radar, 1600 MHz antenna, which was used to locate the reinforcing in the slab. 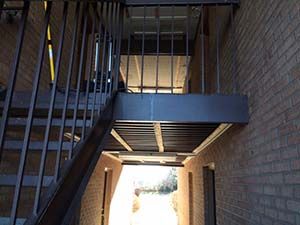